As the live-in manager at her father’s funeral home in Burling Gates, Missouri, Vienna Oaks has succumbed to the mediocrity and abject loneliness of her life. Her days are suspended between the mundane and the misery of her clients’ throttling grief, of changing light bulbs, and encountering strangers as bereft as she. But after orchestrating the funeral for a little boy named Parker prompts a severe panic attack, she finds herself at a personal crossroads in which she is forced to confront the pregnancy she’s been hiding, her childhood nemesis, the boy she never stopped loving, and the deep-seated secret surrounding her mother’s death more than a decade before.

In another part of town, Heather Turnbull has just learned from her estranged father that her mother, a lifelong recluse, has died. When making arrangements for her funeral, Heather chooses Oaks Family Funeral home, where she comes face to face with Vienna – the woman she tortured throughout grade school, the woman who has recently had an affair with her husband.

Together, Vienna and Heather navigate through a makeshift friendship born of circumstance and devised to assuage their ambivalence towards motherhood and their tenuous relationship with reality, discovering, in tandem, the art of forgiveness and the will to go on. With humor and poignancy, Ericka Clay’s debut novel, Unkept, explores the thorny landscape of childhood trauma and the ferocious politics between little girls — and the adults they become. 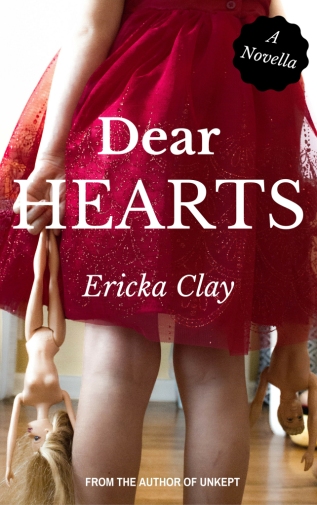 From the outside, Mitch and Elena Reynolds are a typical White Smoke, Arkansas family: married, raising a daughter, running a local business, attending church on Sundays. But their happy family image starts to crack when Mitch has an affair with a local man, Aaron Hooper.

Mitch and Elena’s tumultuous relationship is further tested with failed attempts to get pregnant again, forced AA meetings to curb their alcoholism and bitter therapy appointments to try and “fix” their daughter, Wren.

It’s not until both Mitch and Elena trust in their love for their daughter that they begin to rekindle the connection they first formed as kids. But is it too late?

From the author of Unkept, Dear Hearts is an exquisitely told tale of love, loss, and human connection in the wake of darkness.